In this article, Standard Indicator Nymph Fishing Part 2, Skip talks about other deadly techniques to keep in mind when fishing the nymph. To read about techniques with the standard nymph indicator, see Part 1.

The trailer nymph rig works; I know because I've fished it plenty and have caught plenty of trout on it. But the once-popular dropper nymph rig has some advantages over it.

The trailer nymph rig hangs a second fly off the top fly by a foot or more of tippet tied to the top fly's hook bend. If a trout takes the top fly, there's not much to pad the reaction of the indicator (unless there are split shot or some other weight up the tippet). But if a trout takes the trailer nymph, the tug has to pass UP through the top nymph to send a signal up to the indicator—thus the top nymph acts as a dampener. 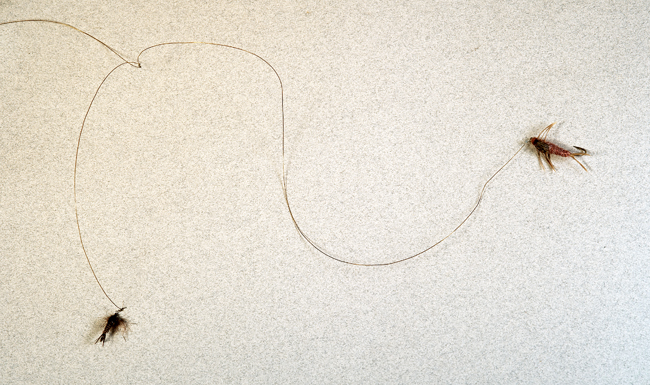 Actually, this all sounds worse than it really is—many trout are caught on trailer nymphs, and they're caught because the angler reads the take and sets the hook.

I'm only saying that when a trout takes the point fly of a dropper rig there's no fly in line above it to dampen the indicator's, well...indications. A dropper rig typically consists of a heavy point fly and one or two smaller, perhaps unweighted nymphs streaming off the main tippet on short lengths of secondary tippet, something like multiple flags on a single pole. Whichever nymph the trout takes, the signal to the indicator goes right up without anything between acting as a dampener.

All this indicator-sensitivity stuff aside, here's the big factor to consider with the dropper rig: the action of the dropper nymph, or nymphs. At least it's the big one for me.


All this indicator-sensitivity stuff aside, here's the big factor to consider with


the action of the dropper nymph, or nymphs.

At least it's the big one for me.

In perfectly clear water with good light at a good angle I've been able to really watch a dropper rig at work. I remember the first time I did so. The point fly was big and heavy, a stonefly imitation I'd chosen for the rocky, fast, stonefly sections of the anomalously swift spring creek; the dropper was a small unweighted mayfly imitation.

It was quite a show.

The big point fly glided quietly for short stretches, then bumped a stone—when it did, the little dropper nymph, streaming behind, at most a foot off the bottom, shuddered convincingly, the look of a little nymph swimming against the current.

The thought formed in my head that if I were a trout down there, there'd be no way I'd let that one get past me.

And the little dropper was pointed consistently upstream, into the current—in my experience, that's often what nymphs do as they shimmy back down to the safety of the riverbed. While it was easy for me to imagine the big stonefly moving a fish, the little dropper seemed irresistible to trout.

I used to fish the dropper system a lot, and lately I've come back around to it. The advantages I've explained; the disadvantages...well, you need to know them. The main one is serious tangles, and those tangles seem to come most often during casting. The dropper rig is a tangle in waiting.

So you must cast very smoothly, with open loops and long, graceful strokes of the rod—rush a cast or let your concentration slip for a blink and the whole lovely rig balls up in midair.


For most of my nymph-fishing career I simply raised my rod-tip to tighten on a trout. It was always a quick set—in indicator nymphing you must set the hook as soon as the indicator tells—but the rod-tip generally went upwards and back.

Then, some years ago, I saw video of some very savvy Czech nymph fishers and they consistently set the hook downstream. Hmmm... A trout must face upstream, so drawing the hook downstream, not forward out of but back into a trout's jaw, made perfect sense. I started swinging the rod low and downstream to set, and it seemed I hooked and landed more trout. No, I didn't conduct a study. It's just an impression. I still forget to set downstream sometimes, but I try. Old habits...

But Czech nymphing is one thing, with no strike indicator and a short line—how much angle really gets into a hook-set with a nymph three feet down and the resistance of a strike indicator above, 30 feet out from he or she who sets the hook?

My guess (and that’s all it is): some. And, it would seem, enough. Enough to make a difference.


You simply can't set the hook too quickly on a nymph—too hard, yes, because you want to set the hook, not yank it out—but never too quickly. If you could tug the hook home at the exact moment the indicator spoke, not a millisecond's delay, that would be the ideal.

No one will ever realize that ideal, but for the nymph fisher it's a fine goal. One move that will take you closer to that goal is to strip in a little line as you set the nymph.

This may not work for everyone, but it works for me. As I jerk the rod downstream, I yank in a bit of fly line, as though I'm making a haul on a cast. Now I've got the rod responding and the line responding too—theoretically, a response doubled in speed.

The trick is to pull the line quickly without pulling it too hard. Between jerking rod and jerking line it's easy to get a violent hook-set, which means a broken tippet or a fly simply yanked free.

Getting the two under control while maintaining their speed takes practice.

So practice. The extra hook-ups are worth the effort.


Fish the Bottom, Unless You Can't


Losing nymphs is called "nymph fishing." You get that weighted fly right down among the rubble of a river bed and, sure enough, you snag up now and then. A significant percentage of those snags never let go and you break off another fly.

But considering that a bottom-bouncing nymph catches the most trout most of the time, it's a fair trade.

Sometimes, though, you really can't bang the riverbed without breaking off one fly after another—there are reasonable limits to how many nymphs you should lose per hour. I normally consider one per hour about my limit, and I'd better get some pretty good fishing in exchange.

One problem is that the nymph is simply too low. It's one thing to tick the occasional rock-top; it's another to drag the nymph along the bottom so that it snags on half its passes—the former is your goal, the latter is just ineffectual grief. You cannot catch a trout when your fly is snagged on the bottom.

Some rivers won't allow even the ticks. The rivers I fished in Michigan are a good example—every one was so constant in depth and, apparently, in flow, that wood debris littered their squared-off edges. Many of Michigan's rivers run through sandy soil, which probably explains their uncommon nature. Anyway, I tried the bottom-bumping nymph and caught a whole lot of bottom while my nymphs vanished at an alarming rate. I finally realized the trout were just going to have to come up a bit for my fly or not be caught.

There's a section of a trout river only a few hours' drive from my home where boulders about the size of large watermelons love to eat up artificial nymphs. I asked at the local fly shop about that and was told they had worked gradually up to this solution: keep your nymphs a little high. Basically, they said, don’t go down between the boulders because you'll snag them constantly; instead, set your indicator to skim your nymph over the tops of the boulders.

They also said you won't reach as many fish that way, but instead of spending all your time snagged, you'll catch some fish.

Turns out Czech nymphing has brought us a gift for all our nymph fishing methods: jig-hook nymphs with slotted beads. Over the past few years I've fished jig-hook flies a lot, and have caught a lot of trout on them.


I'm a fan of them primarily for two reasons:


It's true that weighted nymphs, especially the ones tied on down-eye hooks, tend to ride upside down. But that's probably inconsistent and likely such flies do considerable tumbling in the current. (In addition to my lack of expertise on fluorocarbon underwater visibility, I'm also no authority on down-eye-nymphs-in-currents physics. Guess I'm not an expert in a lot of things.)

Anyway, it's a winning bet that jig hook flies with their hook-eyes raised on stems always ride point-up. As I mentioned before, losing nymphs is part of well-executed indicator nymph fishing—but losing nymphs is certainly not the point of it. I'm sure we'd all like to keep as many flies as we can—I'm especially sure I'd like to. Jig-hook nymphs help us do that.

A loop knot, as I also mentioned, is a wonder with nymphs. They jiggle and tumble and do pretty much whatever they want to do because a loop knot leaves them free to do it. The more they move, the more life-like and convincing to trout they become.

But jig-hook nymphs? Whole new ballgame. First, the real weight on a jig-hook nymph is and should be the bead, and if that bead is tungsten the weight can be impressive; tungsten beads weigh much more than conventional metal beads .(Yeah, again, no expert on bead weight, and I looked at the packages of my standard and tungsten beads to find weights and none were given. So I'm just sticking with “weigh much more”—I can easily feel the difference.)

The idea is that with no additional weight of any consequence, beyond the slotted tungsten bead, added to the dressing of a jig-hook nymph, all the real weight is centered below the hook's eye. The fly is almost balanced in weight on either side of its hook eye. So instead of sagging to the heavy side, such a fly, swinging freely from a loop knot, can shimmy like a hula dancer rolled in itching powder. (And again, not an expert on itchy hula dancers, but just imagine...)


No one seems to question that nymphs are the most reliable way to catch trout in most rivers, so improving your standard indicator nymph fishing is undoubtedly worth pursuing.


Hope I helped you in that pursuit.