So what exactly is the bass-bluegill lap? 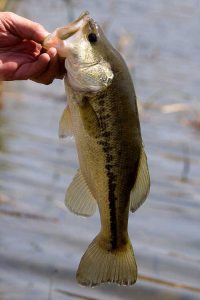 
Picture in your mind all the creatures that largemouth bass and bluegills might eat.

Line up those creatures in order of size, the little insects like chironomid pupae progressing to such bigger ones as dragonfly nymphs and finally to those that now seem enormous—frogs and salamanders and even warm-blooded mice.

Draw a circle around the likely bluegill foods; draw another around the bass foods. Now look at your circles—the second circle overlaps the first.

And that's it, that space in which the two circles meet—that's the bass-bluegill lap.

What Does the Bass-Bluegill Lap Mean?

If you happen to be a creature in that lap and happen to live in a bass-bluegill lake, this is bad news. It means that your life is in double danger—not one but two fishes have selected you from the menu.

If you happen to be a fly fisher who fishes lakes containing bass and bluegills, this is good news. It means double opportunity.

The creatures I picture in the bass-bluegill lap are dragonfly nymphs, big bumble bees, Hexagenia mayflies, small leeches, baby frogs, even the babies of the bluegills and bass themselves. There are surely others, but mostly, figuring out exactly what falls into the lap isn't all that important.


It isn't important because neither bass nor bluegills often feed selectively.

So what is important is size.

The Important Factor in the Bass-Bluegill Lap:

Getting the Size Right

In The Sunfishes (the second edition), author Jack Ellis says:

The size 6 bug may not be a full meal for the bass, but it's substantial enough to bring him up. Small bream will inspect such a fly, and the big boys, the ones we are primarily interested in, will have no problem taking it. 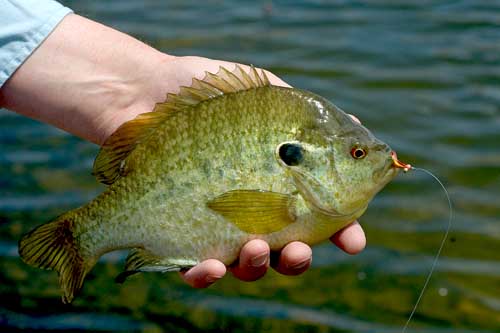 A Large Bluegill caught on an SMP

The hook Ellis refers to is a size-6 Mustad 3366, and there you have it—a fly tied on this size-6 hook falls into the bass-bluegill lap.

There are other good hooks for flies in the lap—lots of others. The one I use often is the Tiemco 900BL, size 8. It's just a shade smaller than the size-6 Mustad (Hook manufacturers never quite agree on the rules about gauging hook-size—a size-8 hook should be significantly, not just a shade, smaller than a size-6.)

The Tiemco has a wide gape, and thick-enough wire to hold a good bass. (It's described as a "heavy wire dry-fly hook" by Tiemco, and though I wouldn't want to wrestle a three-pound largemouth from a jumble of snags with it, I believe I've taken three-pounders on it under kinder conditions.)

The Fence Rider: A Fly Designed for the Bass-Bluegill Lap 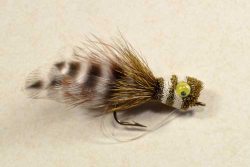 Jack Ellis even created a fly called the Fence Rider whose only important feature is that it is always tied on a size-8 Mustad 3366.

The expression "riding the fence," from which this fly got its name, means staying in the middle of things, committing to neither side yet dabbling in both. Ellis and I are simply viewing the same concept from slightly different angles; in other words—his "riding the fence" is my "lap."

The Fence Rider is simply a fly designed to fall neatly into the lap.

Fishing the Lap: Skip's Top Flies for Bass and Bluegill

Ellis knows bluegills and largemouth bass, likely better than I ever will. So I use his Fence Rider—with fine success—but like most fly-designers I lean towards those fly patterns that carry my own byline. The flies I most often use for fishing the lap, tied on the size-8 Tiemco (or comparable hooks), are my SMP and Skip's Fusion Bug. 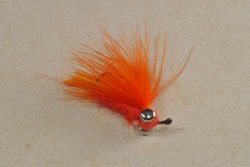 The SMP is a lively, simple quick-sinker for fish that are down a few feet. This fly sinks so well on its own, that I fish it not on a sinking line but with a full-floating line.

The Skip's Fusion Bug started out as a bass fly, but I've found that in smaller sizes, pan fish adore it. It's like a Dahlberg Diver, but its collar is foam, which keeps it floating forever—in fact it fishes best when its deer-hair body is sodden and nearly sinking. 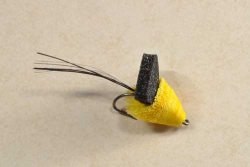 The Clouser Deep Minnow, small(which I didn't create; credit goes to Bob Clouser and Lefty Kreh), is another fly on which I've taken both bass and bluegill.

On a farm pond in Arkansas, my wife Carol and I hooked almost an endless procession of bluegills and little bass for hours one afternoon. Then our host, a southern gentleman named Billy, took us out in his boat.

We hooked more bluegills; then Carol hooked something that just wouldn't come up.

After what seemed like ten minutes she still hadn't got it anywhere near the surface, her rod in deep arc the whole time.

It was clearly the biggest largemouth Carol had ever hooked, and after all that wrestling it still charged the bottom and found something down there to wrap with and then snap the leader. Carol has caught two-pounders.

This was much bigger, much bigger indeed. And we never got even a glimpse of it.


But that big bass took a little Clouser that a modest-size bluegill could fit in its tiny mouth.

Selecting a Fly to Fish in the Bass-Bluegill Lap

Substantial largemouth bass take tiny flies of all sorts now and then. I once hooked a fine bass on a size-12 soft hackle fly in a desert pond that lay in the dust of Eastern Washington State. I wasn't even thinking of bass, though I knew they were there, and expected only another palm-size bluegill.

But skinny little flies like that soft hackle won't normally interest a decent bass. If you plan to fish a fly in the bass-bluegill lap, small though it is, that fly should appear thick or full or corpulent. All the flies I've previously listed as my favorites (except, perhaps, the Clouser, which is nevertheless substantial) fit that description.

Charge Up the Action:
Add a Dropper to a Floating Lap-Fly

One very effective variation, which I use whenever the bluegills and bass seem to prefer a lazy sunken fly, is the dropper.

To the hook-bend of a floating lap-fly (I usually use my Fusion Bug) I tie about a foot of tippet, and to that tippet I tie a not-too-heavy SMP (with bead-chain eyes instead of lead) or a big plump McGinty (a beelike wet fly).

With each occasional twitch of the floating fly, the sunken fly continues its lazy dance. Which, sometimes, bass and bluegills seem to prefer above all else. Once in a while, of course, something sucks or slashes down the floater.

Try Fishing Outside the Lap:
Put a Bass Fly on Top with a Bluegill Fly Below 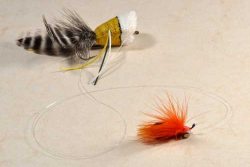 A whole different approach from the bass-bluegill lap is to offer the bass one fly and the bluegills another—all on one rig.*

I sometimes put up a modest-size (too big for the lap) Skip's Fusion Bug, then tie a foot of tippet to its bend, and on the tip of that trailing tippet tie an SMP (a heavy lap-size one—it can't drown the big bug from which it hangs).

The idea is that the bass will take the Fusion Bug, and the curious bluegill that comes to investigate the bug's commotion (bluegills are curious) finds the SMP.

But it doesn't always work as intended.

Once in a while, the bluegill takes a swat at the Fusion Bug, but that's fairly rare. What really surprised me is how often a good bass takes the SMP. This is a little SMP, you understand, a size-10 or even -12. I guess the bass decides:


Whatever the reason, I run into this often, never knowing what will clamp down on my little pan-fish fly next and pull down the big bass bug.

Using the Bass-Bluegill Lap Technique for Other Fishes

Even though I think of fishing in the lap as a tactic for largemouth bass and bluegills,
I've caught all sorts of fishes this way: crappies, yellow perch, rock bass, green sunfish, smallmouth bass, spotted bass, and one other I'd never have expected.

A bunch of friends, Carol, and I were in our second day of fishing on a big Washington lake. Fishing with flies in the bass-bluegill lap, we were doing well on bluegills, with a fine largemouth of one to two pounds now and then as a welcome surprise. Then Carol hooked something that wouldn't show, as she seems inclined to do, and it began to dawn on us all that it was something big.

I reached for my camera. She played the fish—we were sure it was an enormous bass—over twenty minutes passed before we even saw it. It was a carp, a grass-eating carp, one of many that were planted in the lake to chew down the water plants that flourished each summer.

Six or seven pounds of strong, tenacious carp—on a bug a bluegill could swallow! The light was good and I had every reason to hope my photographs were good. She released the fish as I popped open the back of my camera to replace the used-up film.

But there wasn't any film; I'd shot 36 exposures on nothing at all. I was heartbroken, Carol was deflated. How often does a grown carp take a size-8 floating fly?


Once in a lifetime, I guessed, with luck.


The next morning, she hooked another carp on the very same tattered fly. This one weighed eight pounds. There were plenty of pictures taken, all with film. 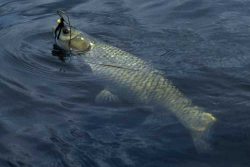 The rest of that day through the next we hooked four more carp, all around six pounds each. More photos, more film.


In part two of this article, Bass-Bluegill Lap Flies, Skip lists the patterns for his favorite flies to fish in the lap.


Back to Fly Fishing Articles from The Bass-Bluegill Lap