The Choice: Flared Hair or the Bullet Head? 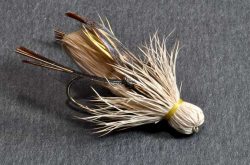 The bullet head on a dry fly

There are two basic methods for creating a large buoyant head on a dry fly:


And there are good arguments supporting each type of head.


Making the Choice...Which One Should You Use?

The best argument for the flared-hair head is that it's tough—the hair is secured at the hook and free at its ends, so trout teeth, or anything else that might tear the hairs out, simply pass through leaving the hair intact and the head unharmed.

The best argument for the bullet head is that it's a quick cinch to tie compared with the flared-hair head.

Yes, the bullet is the more fragile of the two, but if made right, it's tough enough.

The key to making a bullet head right is to make it out of the right hair—elk, not deer.

Most tiers probably turn to deer without thinking whenever buoyant pocketed hair is called for, but deer is soft and somewhat fragile; elk is stiff and tough.

The point is, if your bullet heads have quickly shredded in the past, they were probably made of deer—in the future, make them of elk.

Another concern is choice of thread—you'll need strong thread to tightly bind the elk and flare its tips. I suggest you use at least 3/0, and I wouldn't hesitate to use size-A rod-winding thread or flat waxed nylon on a big fly.


The Bullet Head's Hairtips...Legs or Wings?

The hair-tips of most bullet heads flare out to suggest insect-legs.

Some tiers trim away the hairs from the underside to expose the body and, perhaps, to make the leg-effect more distinct. But as with all aspects of tying flies, bullet heads have their variations.

The Madam X for example: its head is kept entirely atop the hook so that the hair-tips form not legs, but a wing. The legs are formed of rubber-strand, bound at the sides of the thread collar securing the head.

The Goldenrod and Salmonrod, stonefly imitations developed by my friend Rod Robinson, have short hair-tips, short enough to lie neatly down at the sides.

Rod has two ways of creating the legs:

We've all heard fly fishers say they are using a "Woolly Bugger" or a "Parachute Adams," and then, as we inspect a sample, add,

"You can see I used olive synthetic dubbing and a rib instead of the orginal body."


There is nothing whatsoever wrong with this.


In fact, I'd be a bit suspicious of a tier who didn't play with variations (to put this in perspective, most people would be suspicious of us both, our being fly fishers in the first place.)


So the bullet head becomes yet another option for the tier.


He can—and will—find a way to add it to the Sofa Pillow, the Elk Hair Caddis, and whatever fly he suspects may be improved by it; or, of course, to whatever fly he thinks he'll have fun changing—fly tiers are far less concerned on the whole with utility, I've found, than with fun.

But the sensible use of the bullet head is on flies that imitate insects with large heads—most notably, the stonefly and the grasshopper.

Many fly patterns that imitate these two insects have bullet heads. But many don't; which means, of course, that they could.

On some flies the addition will be logical and easy; on others it may be a small tactical challenge—but what kind of fly tier would shrink from a challenge, especially such a modest one? (Answer: another fly tier I'd keep a suspicious eye on.)


So the bullet head makes sense on imitations of big-headed insects; but since lots of flies are "attractors," flies that imitate nothing in particular, the bullet head has a lot of other potential uses.

And, of course, there are a lot of fine fly patterns in which a bullet head was included from the start.

Here's how to tie the Bullet Head: 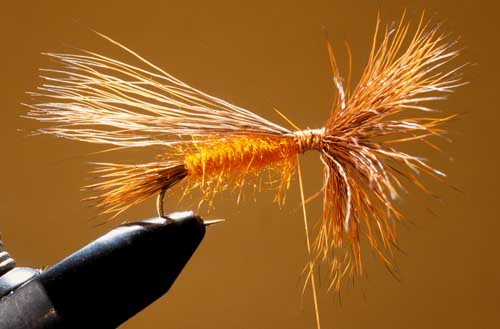 Trim a modest-size bunch of elk hair from the hide, comb the short hairs and fuzz from the bunch, and then stack the bunch in a hair stacker.

Take two turns of thread around the butts, hold the butts firmly in place, and pull the turns tight. Continue adding tight thread-turns to bind most of the hair butts. Trim any long elusive hairs away.

Wind the thread back to the front of the body. 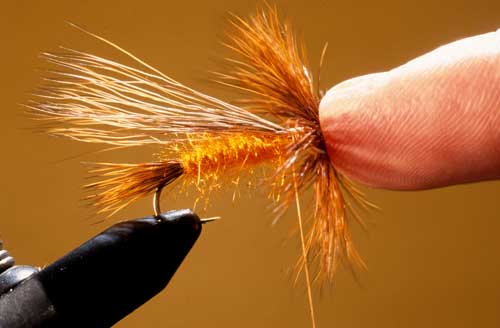 2. Push your finger straight towards the eye—the result will be that the hair flares out from the eye, each hair to its respective side. 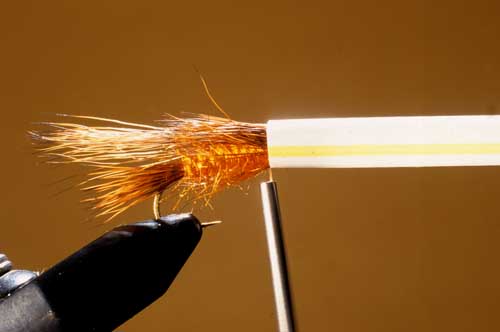 3. Stroke the hair firmly back along the body and hold it. (My friend Rod Robinson pushes back the hair with the tip of a plastic drinking straw, as shown here.) 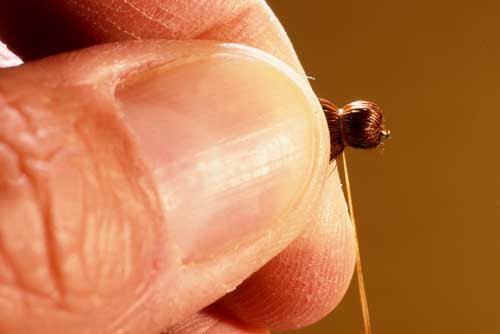 4. Wind two turns of thread around the hair and pull the turns tight.

Add several more tight turns and then whip finish and trim the thread.

(If you used the drinking straw, you can add the two thread-turns, remove the straw and hold the hair-tips back with your fingers, then tighten the turns, or you can keep the straw on until the turns are tightened.) 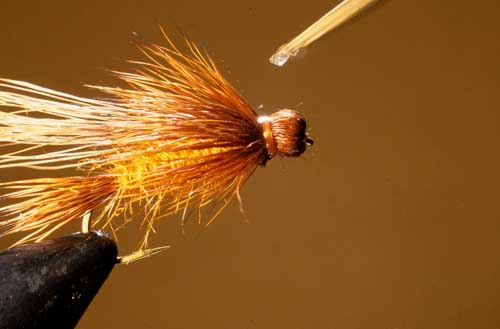 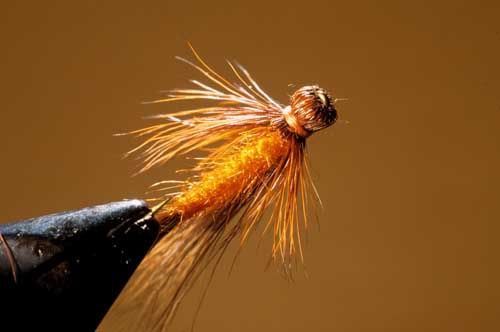 6. Some tiers prefer to trim away the hair-tips beneath the fly in order to expose more of the body, as shown here.

...and that is how you tie the bullet head.


Back to Fly Tying Articles from The Bullet Head


Back to Skip Morris Home Page