The Truth About Chironomids
Part Three

In The Truth About Chironomids Part Three, Carol discusses the unique characteristics and behavior of Chironomids that make them such an important food source for trout, and an essential part of the fly fisherman's arsenal.

The article concludes with three hot chironomid pupa patterns designed by the experts.

Chironomids are "Fast Food" for Trout 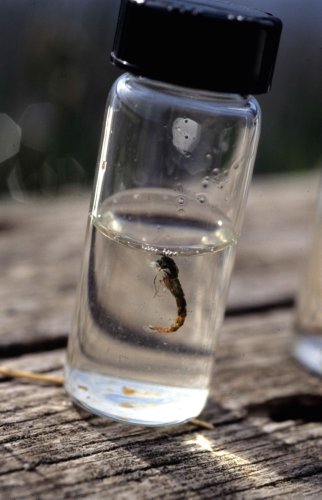 A Chironomid pupa displayed
in a sample collection vial.

To understand why it is important to fish with Chironomid imitations, it is necessary to look at their characteristics in general.

Chironomids are fast food for trout in lakes. Abundant in number—more than 5,000 species exist world-wide—they are found anywhere and everywhere in lakes: rocky areas, plants, sand, silt, and most commonly, mud.

They come in a variety of colors, and in sizes from one to two millimeters up to 25 millimeters. They hatch all year 'round, and have their developing stages, larva and pupa, occur deep in lakes where they are easy prey and there is good cover for trout.

These combined characteristics make them a steady, easily available food source on which trout can depend.

It's A Chironomids' Life 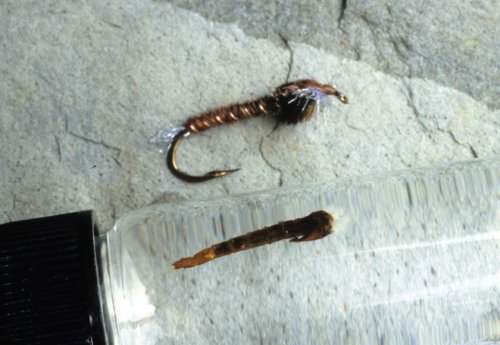 From these facts alone, it isn't hard to see why trout probably eat Chironomids more often than anything else that hatches in lakes.

But, in addition to knowing their characteristics, it is also important to understand the parts of the life cycle that make it vulnerable to trout.

Chironomids have a complete life cycle that progresses from egg to larva to pupa to adult.


Trout feed on all these stages except the egg.


The female Chironomid, during her egg-laying flight, dips her abdomen into the water, releasing the eggs just below the surface. The eggs then settle to the lake floor, and soon become larvae. Most fly fishers refer to this larval form as a "bloodworm" due to a hemoglobin-like substance in their body that makes them appear blood-red.


It is important to note, however, that this stage also occurs in shades of green and brown. 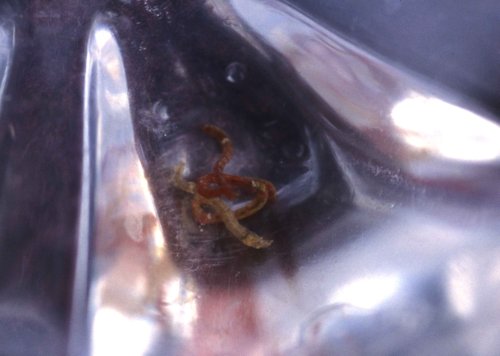 The larval form of the Chironomid,
called the bloodworm.
Note that these larva vary in color.

After molting several times, the larva seals itself in a tube in the mud, and becomes a pupa.

The pupal stage is probably the one that is most commonly fed on by trout, because it is the stage that is most abundant throughout all the layers of a lake.

From the Mud to the Surface:
A Fresh Look at the Chironomids' Migration

It is often thought by anglers that Chironomid pupae migrate directly from their mud tubes to the surface to hatch. However, Brian Chan (a well-known fisheries biologist from British Columbia and Chironomid fishing expert) has documented another aspect of this insect's life style that explains why fishing these imitations deep works so well.


He took a team and an underwater camera to one of his area lakes to videotape migrating pupae.

What he found is that after leaving their mud tube, the pupae swirl around in the water one to two feet off the bottom of the lake bed. During this process, they mature (stage) for three to five days before they make their journey to the surface to hatch as adults.

This explains why the first one to two feet off the lake bottom is often so productive, and also why trout often take Chironomid pupa imitations deep in the lake when there is no evidence of a hatch on the surface.

The rest of their migration is common knowledge: they ascend to the top by means of air trapped in their shucks—the buoyancy is what takes them to the surface.

They wiggle, squirm, and jerk their way to the top, and this is a very slow ascent.

So this slow journey, in addition to all their motion, makes them very vulnerable to trout. Trout don't have to expend much energy to eat them.

They are deep enough to offer safe cover for feeding trout from other predators, and they can hatch en masse, so there is no shortage of food.

An easy meal, good safe cover, and abundance: this is the ideal feeding situation for trout.


Trout also feed on the larvae and adults, but probably not as often as they feed on the pupae. Larvae will leave their mud tubes to feed on vegetation, and this is when they are likely to be targeted by trout.


Brian has noticed some lakes in British Columbia where fish consistently take the adults at the surface, but only on a few of the lakes found in the Kamloops area.

Skip has fished the lakes on the west side of Washington state for over 40 years, and he has found that trout there do consistently feed on Chironomid pupae at the surface, and on adult Chironomids. He feels the main reason they feed on adults there is because the lakes are not very productive (ie, few insects, few hatches), so the trout need to take advantage of any food, in any form, that they can find, and because the pupae and new adults are concentrated on the surface.


Imitating the Wiggle of the Natural

One of the biggest challenges of fishing a Chironomid pupa imitation is to get it to move in the jerking, wiggling, squirming motion of the natural.


With the standard technique, fly fishers depend on the indicator bouncing on the surface waves to make the fly active. The quick-strip technique uses four to five rapid quick strips to emphasize and exaggerate this motion in the fly, and to draw the trout's attention to it.

An open-loop knot, such as the 98% Knot or the non-slip mono loop knot described by Lefty Kreh, allows the fly to swing free on the tippet. Make sure you use a knot that retains the loop after the strike. 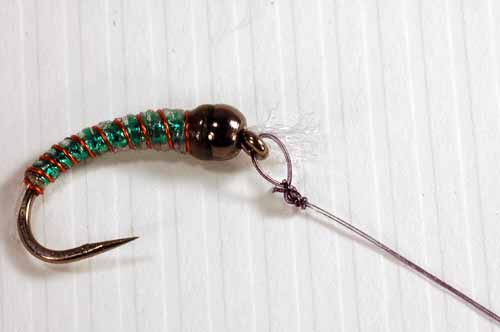 The non-slip mono loop knot allows the fly to
move freely in the water, creating more action.
This loop will not close down after a strike.
The tippet was darkened with a marker
so it would show up easily in the photo.

The Duncan loop knot has been used a lot for this purpose, but the loop closes after the strike and has to be teased open again after the trout is released and before you cast again.

Another easy way to mimic the motion of the ascending pupa is to use a fly like Pete's Wiggler designed by Peter Morrison. This is a jointed Chironomid pupa imitation that has a separate abdomen attached to the hook, so it moves independently of the main fly. You get the wiggle, squirm, and jerk of the natural from the fly itself, without having to depend on the indicator or wave motion.

Neither the indicator technique nor the quick-strip technique are limited to Chironomid pupa imitations.

Peter, Kelly, Brian, and Skip have used these techniques successfully with other nymph patterns: mayflies, damsels, dragonflies, and even leeches. 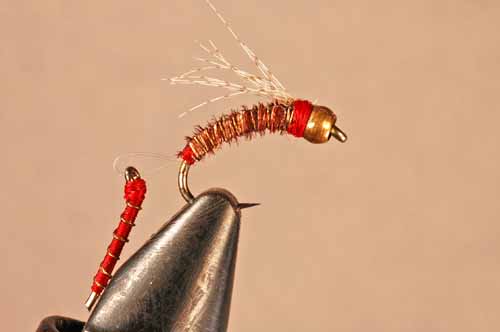 Comments: Cut off the hook's bend after the abdomen is completed and the mono-loop hinge is securely bound on; this makes the process easiest to manage. Shove the ends of the monofilament under the bead on the thorax hook, and then wrap the thread down to the bend. 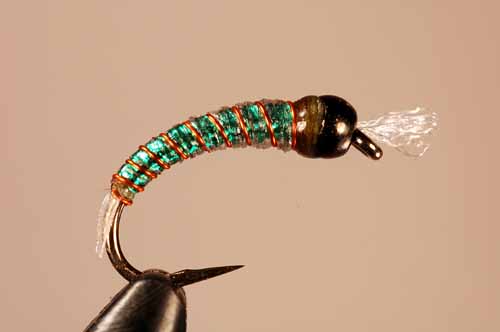 Comments: the latex strip is tremmed to a longish taper on one end, bound over the tip of that taper atop the hook's bend; then the Flashabou is bound on in front of the latex and wound forward, the latex is wrapped up the abdomen, and the copper wire wound as ribs. You can also use colored latex over clear Flashabou. 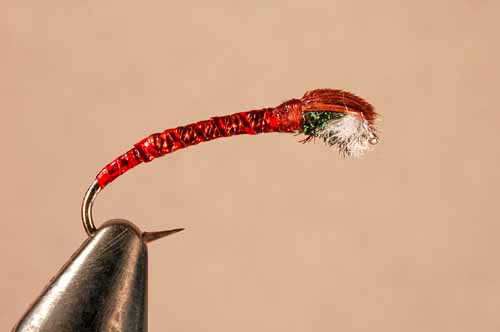 This concludes the three-part article on Chironomids covering the benefits of fishing pupa imitations deep, the life-cycle of this important lake insect, and a detailed explanation of the quick-strip technique that originated in British Columbia's wild lakes.

Back to The Truth About Chironomids Part One


Back to The Truth About Chironomids Part Two