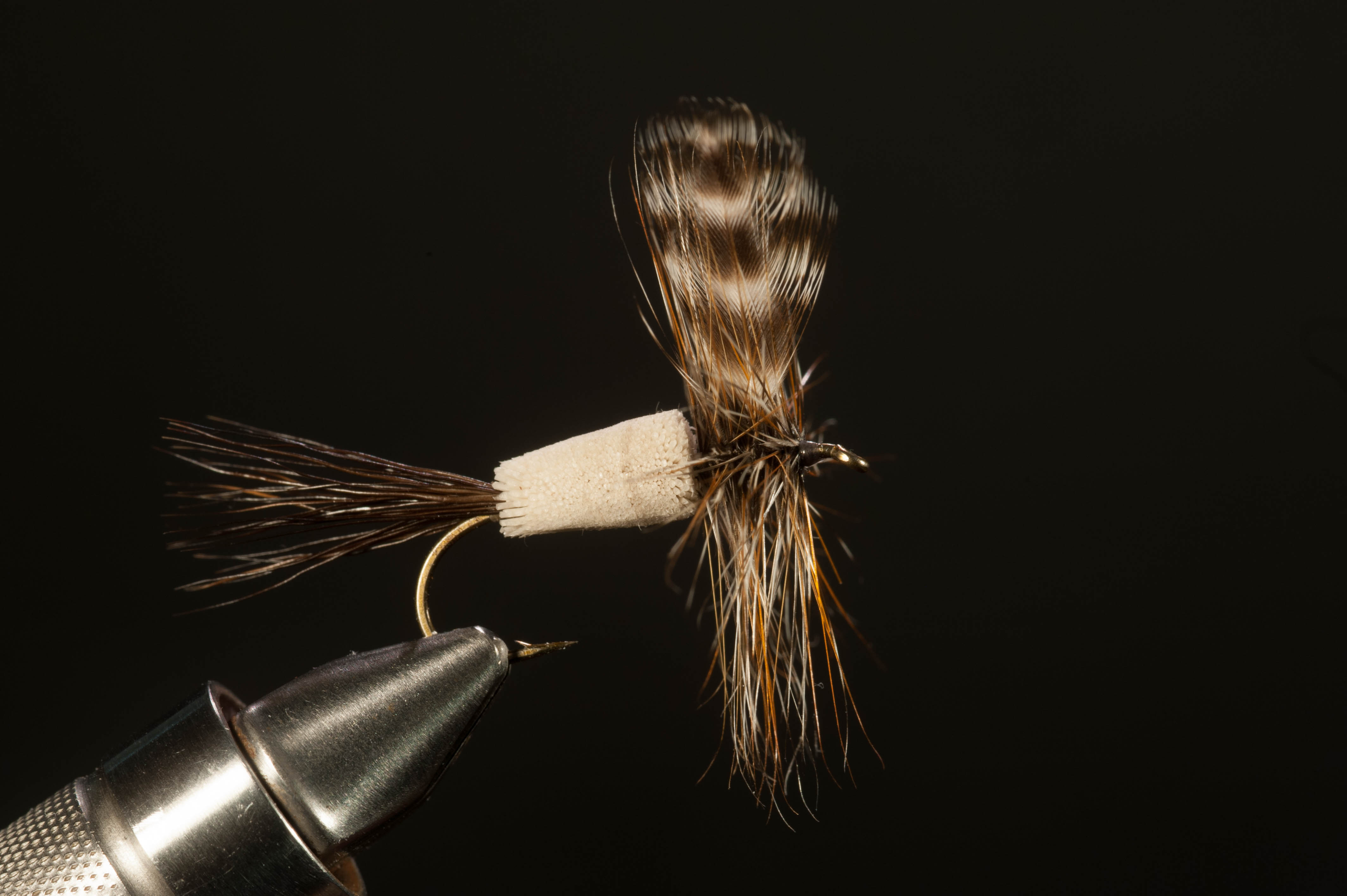 The Adams Irresistible (a name sometimes reverse ordered to "Irresistible Adams") is a hybrid dry fly combining what was widely thought, at the time of its birth, to be the best qualities of both its parents. From the Irresistible it takes the body of flared, packed, and sculpted deer hair—hair that's pocketed, feather-weight (literally), and very buoyant (who doesn't want a dry fly that comes with enhanced buoyancy?). The Adams contributes its overall buggish, trout-convincing colors. (The tail of the Adams Irresistible is forever in dispute—it is sometimes the Adams's tail of hackle fibers, sometimes a tail of this hair or that. Just depends on whom you ask or which book you look in.)

The original Adams is a traditional dry fly bearing a traditional hackle-collar of fibers radiating out from the hook's straight shank, a spiky ruff like the one in the photo. Through the 1970s and into the early 80s (that's my best guess) the Adams was crowded with only a few other dries at the top of almost any list of must-have flies for trout-streams. (Again: that's the original Adams. It is not the now-much-more-popular Parachute Adams.) The Irresistible, also a hackle-collar fly, was further down such a list, perhaps not even on it. But the fly certainly had earned itself a loyal and sizable following.

An almost universally loved fly pattern and one less widely loved are not an inevitable pair for producing offspring. (If they were, the resulting fly might have been named the Adams Inevitable. The "Irresistible Inevitable"? That tongue twister? Please . . . ) But in this case they make a very logical and practical union that has borne us a fine result.

Whereas the old Adams has always made a solid mayfly-dun imitation, the Adams Irresistible makes a chubbier but still viable one. Both flies remain fine choices for just working a stream, giving the trout something plausible to come up to.

I think of the Adams Irresistible, because it bears the Irresistible's buoyant hair body and hair tail (when it has a tail of hair), as a dry fly for choppy water streams, streams of quick currents banging off rocks and off one another. Streams that would soon batter a conventional Adams underwater, but would have a tougher job doing the same to this extra-buoyant variation of it.

THREAD: Gray, black, or brown 8/0 or 6/0. (I like size A rod-winding thread for binding and flaring the body hair.)

HACKLE: One grizzly and one brown, one wound through the other.