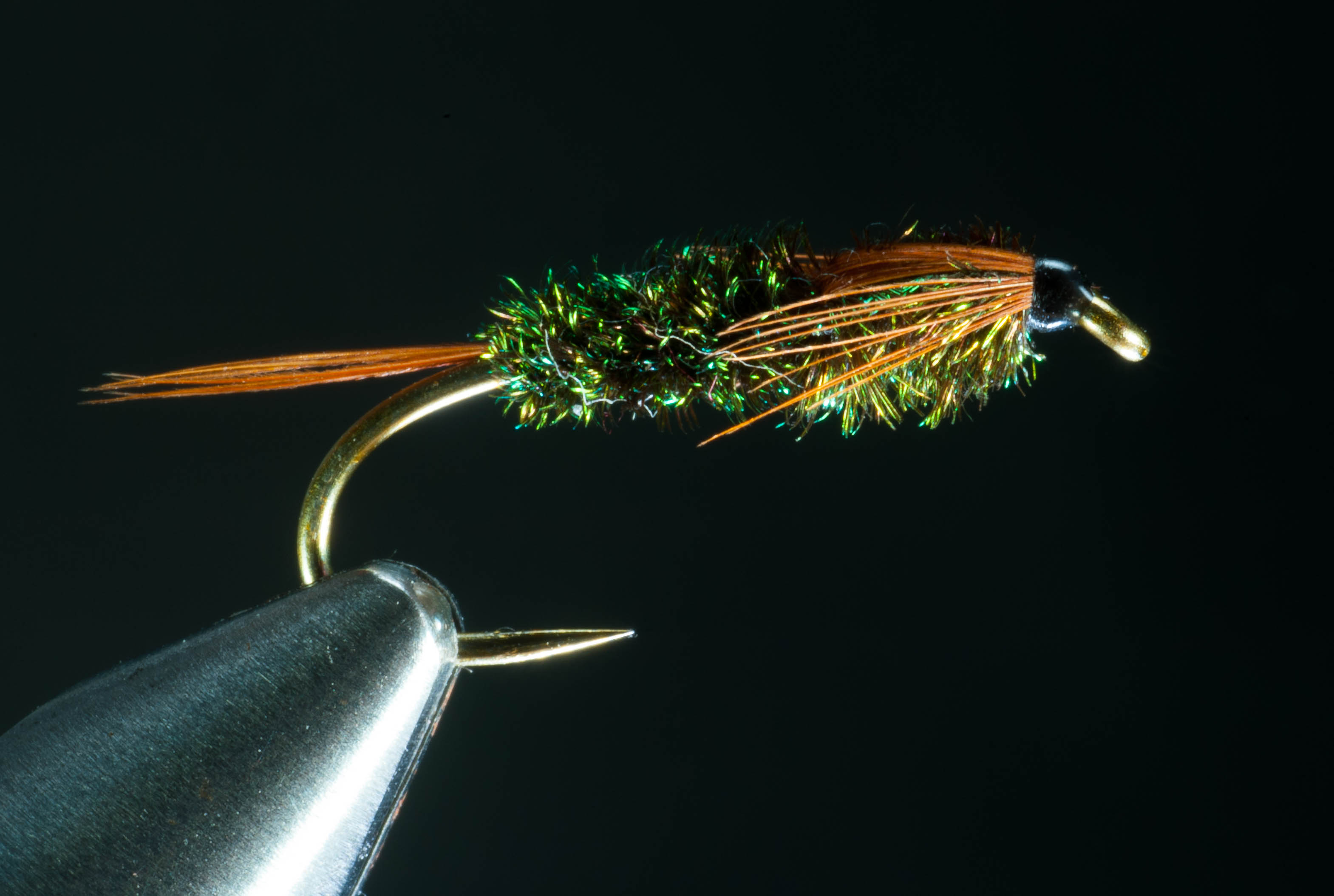 And if you decide to tie a few with metal beads on their front ends, to make them cut down through swift currents, down to the 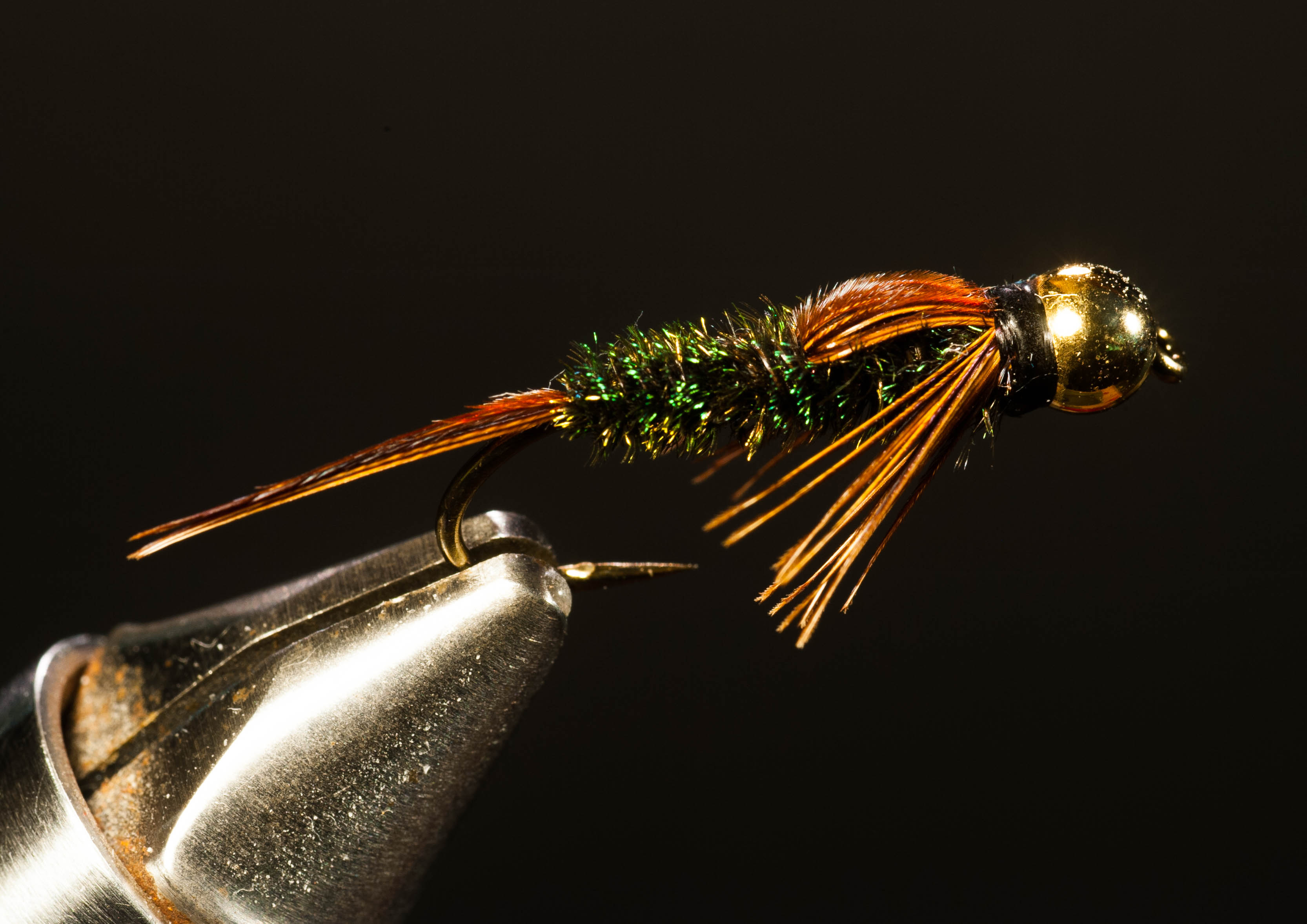 trout holding close to the stream bed, please, by all means: do that.

I feel more of us American fly fishers should pay attention to what our Canadian fly‐fishing brothers and sisters are doing up there. Here, in Washington State, however, we are fairly tuned in to what's going on in our sport just upstairs in neighboring British Columbia. This is in part a result of plain proximity, of course. But also, our awareness of Canadian fly fishing stems from a lot of our state's and BC's fishing being about trout lakes. There are trout lakes just everywhere in Washington (in fact I live an eight‐minute drive from a good one), on both sides of the Cascade Mountains that split the state physically, socially, and by climate north to south. BC is rife with fine lakes across its span (that's firsthand info—I've fished its lakes from Vancouver Island nearly to its Alberta border)—including the abundant lakes of the Kamloops region, made famous by their trout, the Kamloops rainbow, a fish in turn made famous by its habit of leaping repeatedly and magnificently and sometimes eye to eye with a boat‐standing angler.

The fellowship between Canadian and Washingtonian fly fishers (and my many fishing days up there over decades) is why I know about a real Canadian standby nymph, the Halfback.

A pretty old standby. The Halfback was created by a Canadian named John Dexheimer in the late 1950s.

The Halfback's name is made clever by a peculiar but defensible logic: the rear "half" of the fly, the abdomen, has no "back." The front "half," the thorax, is topped, is backed, with a wing-case. None of this, to be clear, has anything to do with American football players who position themselves behind lines of scrimmage.

Most fly fishers who fish that vast extent from the southern end of Washington far up into BC, consider the Halfback a lake fly and that alone. My impression (and it is only an impression) is that the Halfback is most often fished to suggest some general sort of real nymph, or possibly pupa, and works when trout are just looking for something, anything, to eat. But the Halfback sure looks like a mayfly nymph.

In streams, the Halfback makes a fine imitation of many species of mayfly nymph because so many there are dark, like the Halfback. Not so fine a match for the mayfly by far most common in lakes, though: Callibaetis. The nymph of Callibaetis is, in most lakes (its lightness does vary), a mix of middling to pale tones. But how picky, on average, are trout likely to be about how dark or pale a fly is if it matches the swimming of a Callibaetis nymph, it's size, and its shape? Probably not very picky at all. So, sure, why not imitate Callibaetis with a Halfback of matching size?

I've read that the Halfback can imitate a damselfly nymph, and I suppose it can. Colors in damsel nymphs run to dark olives, dark greens. Damsel nymphs have long, slim abdomens and the Halfback is reasonably slim…

In Fly Patterns of British Columbia, author Art Lingren offers, in addition to Callibaetis and damselfly nymphs, chironomid pupae and dragonfly nymphs as insects the Halfback can imitate. I suppose, here too, that open-minded trout would allow the fly this.

The main thing about the Halfback is that it's caught unimaginable numbers of trout for lake anglers. You can't ask for stronger proof of its effectiveness than that.

And for probably two centuries the intricate lightings of peacock herl have proven very difficult for trout to resist. Peacock herl is mainly what the Halfback is.

That stream business, though, I can't let it go. There's not a sound reason in the world why the Halfback can't be a fly for trout streams. It imitates, as I said, the darker of the mayfly nymphs of streams. And then there's the stonefly… Stonefly nymphs are typically dark, can run fully as big as (even bigger than) the biggest Halfbacks, and live only in quick‐moving water—stoneflies never live in lakes. So go ahead and fish your Halfbacks as mayfly‐ and stonefly‐nymph imitations in freestone streams, tail‐waters, spring creeks… And if you decide to tie a few with metal beads on their front ends, to make them cut down through swift currents, down to the trout holding close to the stream bed, please, by all means: do that.

TAIL: Groundhog (woodchuck) hair (the original material) or pheasant‐tail or pheasant‐rump fibers (I've seen all three of these materials listed for the Halfback in books).

ABDOMEN: Peacock herl. (I toughen the herl by spinning it around the working thread before winding it on.)

WING-CASE AND LEGS: Groundhog (woodchuck) hair or pheasant‐tail or pheasant‐rump fibers, pulled forward and bound for the wing‐case, the tips angled back underneath for a beard. (I've never used the original groundhog, consider the pheasant rump too fragile, and go only with the pheasant tail. And I prefer to divide the tips to the sides of the thorax, a positioning that, more than a beard, suggests real nymph legs.)