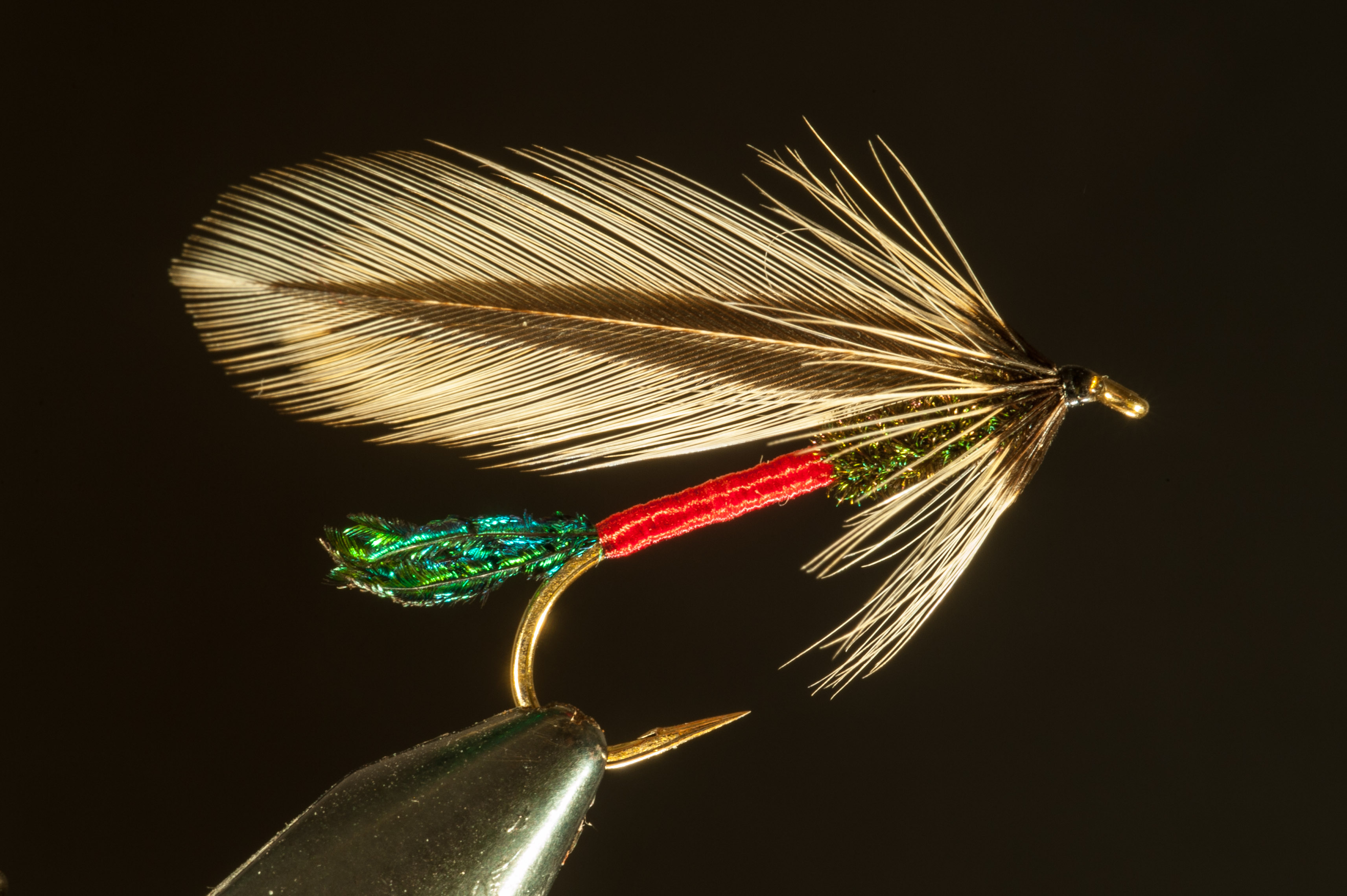 "Then there's those otherwise classic swept-back long-hackle streamer wings, classic except. . .they curve not together but apart. 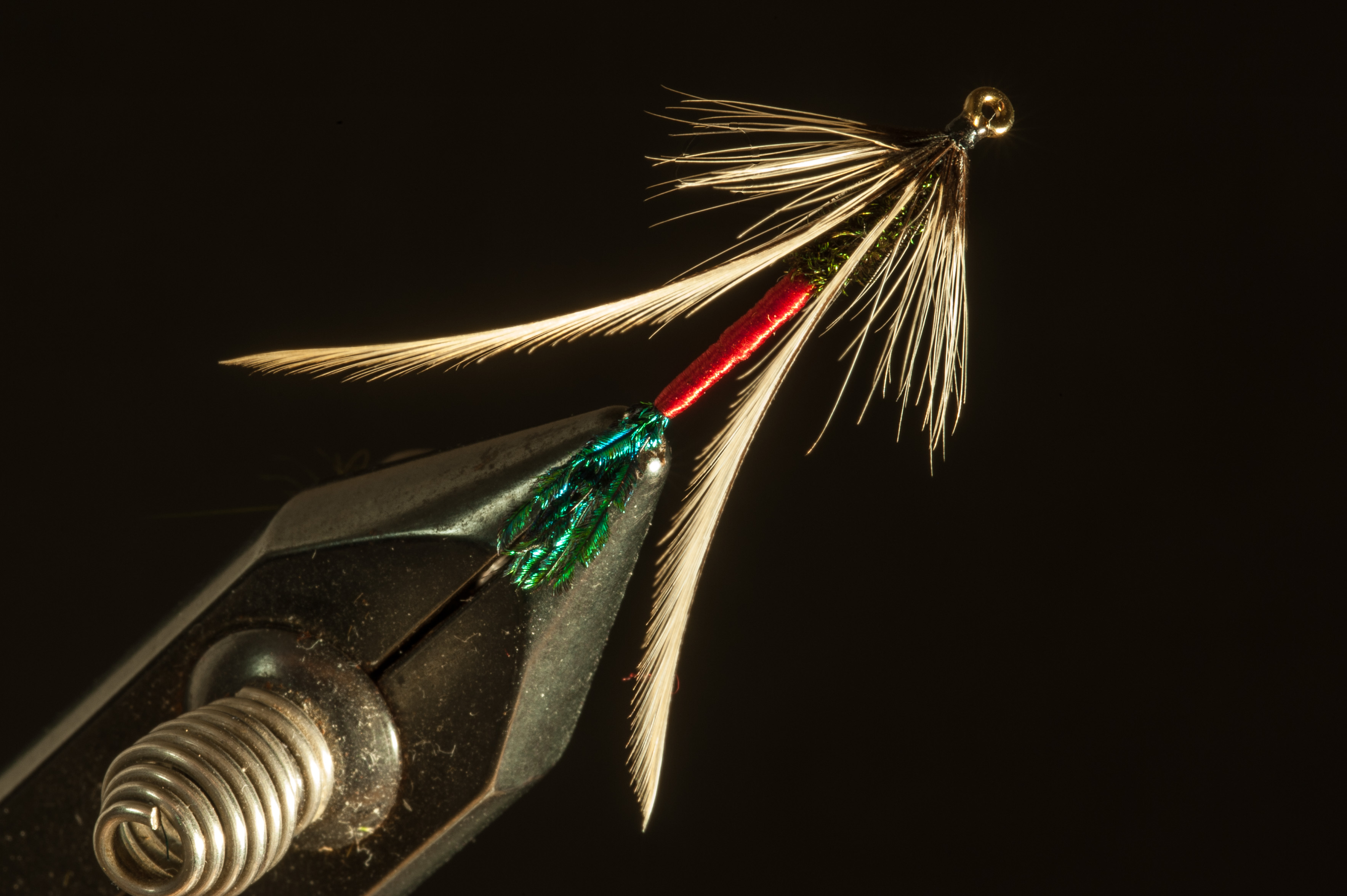 Split wings are so rare in trout streamers that perhaps only the Spruce's wings (and the wings of Spruce Fly variants) do that."

There are many handsome trout streamers—the Spruce Fly isn't unique in that—but there is something about the Spruce in particular that begs it be tied well. I think it's the sweet reward of seeing this dressing of such elegant potential all done right and perched beautiful and noble in the tying vise. Later, just as eye–pleasing in fly box and on tippet. Top, side, underside, oblique—there is no angle from which you can see this fly that it's not a real looker. A looker in the old way, of lovely natural materials which, specifically for the Spruce, are silky floss and soft–sparkling peacock herl and an unusual and intriguing kind of hackle for collar and wings.

That hackle, for a Spruce: when I looked around for it, it proved elusive. It's the badger hackle, which is cream or golden, and to be badger it must have an elongated black triangle running up its stem. I thought of ginger hackle because I was used to seeing the black triangle so common on brown dry–fly hackles. Big dry–fly neck hackles are typically a little soft and therefore can make good streamer wings and hackle collars. But most ginger hackles lack that black center—I just went down to my tying room, sorted through my half-dozen dry ginger necks to prove it, and did: the hackles of only one neck had the triangle.

Badger was, in my long–ago youth, pretty popular. Now it, and flies calling for it, seem almost anomalies. The ideal for the Spruce is really good badger hen neck. So when my local fly shop tried to run one down for me and came up with two dandies, I bought them both.

Anyway, the fly's wing and collar of badger hackle are at most half of the fly's appeal. It's tail is unusual: naturally curving peacock sword herls, instead of the common, mostly straight, eyed–feather herls. And its red–floss–and–herl body is, in my experience, unique. (Yes, yes—red–floss–and–herl is what the Royals, the Royal Wulff and Royal Coachman and others, are all about. But their bodies are herl only banded by floss, whereas the Spruce has a long floss section behind a long section of herl. Quite different.) Then there's those otherwise classic swept–back long–hackle streamer wings, classic except . . . they curve not together but apart. Split wings are so rare in trout streamers that perhaps only the Spruce's wings (and the wings of Spruce Fly variants) do that.

The Spruce is an attractor and a trout catcher. And, like all attractor patterns, it's plain unnatural–name something in a trout stream that resembles the Spruce Fly and I'll be impressed. (Also a bit shocked. And concerned.)

I couldn't find much history on the Spruce Fly, and I tried. In Popular Fly Patterns (pub 1976) author Terry Hellekson says the fly came from an Oregonian, last name Godfrey. When? I don't know, none of my books say when Mr. Godfrey completed his elegant little construct. And that's it, all I could find. Apparently, the Spruce Fly's past is supposed to be none of my damned business.

The fly does have a few names, "Spruce Fly," in my experience, being the most common and the one I'll always use. It's also just called the "Spruce." And it's sometimes called the "Light Spruce," which makes sense as there's a less popular Dark Spruce.

The dressing varies too. One book offers a wire rib to protect the herl of the body (though I protect the herl by twisting it with the heavy tying thread). There's no agreement in my books on the relative lengths of herl and floss, but about 50/50 looks right to me and some books confirm that.

You don't have to know much about the Spruce Fly to make it work for you. Toss it out into a trout stream (usually on a sinking line, to carry the fly down) and then let the current swing it round. Twitch a little added action into the hackle and wings if you like as you strip it back, hoping a big rainbow or brown trout will find the Spruce Fly irresistible, as irresistible as I've always found it.