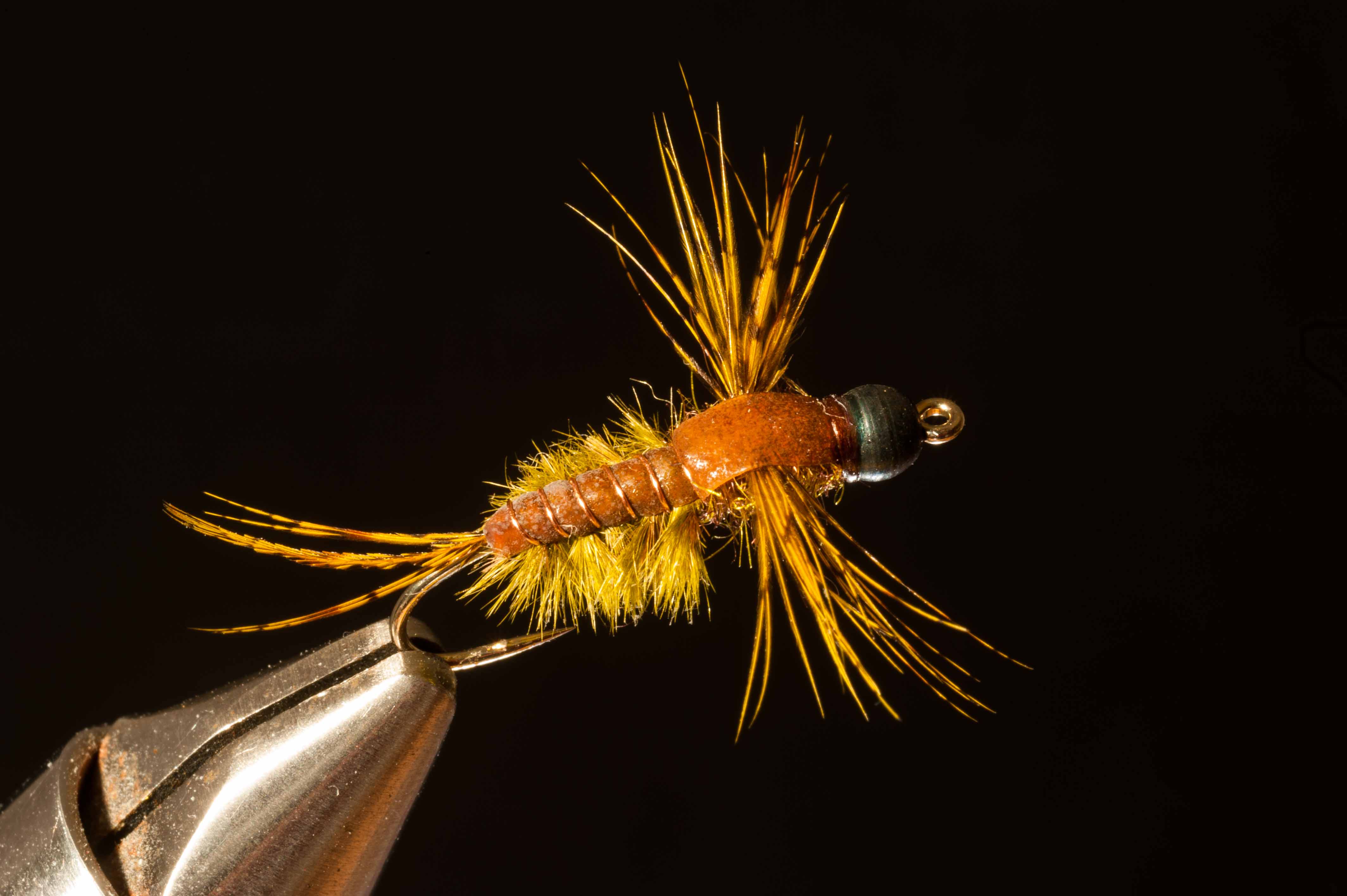 The perpetual debate: Do semi-realistic trout flies carry a trout-catching advantage over impressionistic flies? ("Impressionistic" meaning roughly imitative of things fish eat—flies simple of form and not-very to not-at-all convincing to the human eye.) It's a debate that began long before my long-ago birth and is still fully in play.

Some genuinely sharp trout-stream aficionados would tell you that you never need a fly fitted with the details of its model insect: tails of appropriate angles and number, eyes, ribs, gills . . .—not even wing cases on nymphs (oh, the heresy!). And though these aficionados might be right (which would make me wrong), I disagree. it's the "never" part I question.

I've long believed in what is perhaps my only original saying worth saying: How you fish a fly is at least as important as which fly you fish. By believing in presentation over imitation (or at least that they are equals), I slide over towards supporting the impressionistic-only philosophy. Yet where water is clear and the trout in it are spoiled amid an abundance of feed, and are absolutely done with getting face hooked by fly fishers—and consequently get picky (oh God, can they get picky, stunningly, maddeningly, magnificently picky)—that is where, in my view, anatomically correct flies come in.

The flies that benefit most—by far—from having convincing body parts are (also in my view) sunken flies; this means primarily nymphs, and perhaps streamers that imitate small fishes. Flies that float, up there on or only partly submerged through the face of the water they dent and distort, are hard for trout to really inspect. Making a floating fly convince trout that are focused on a particular insect is about making that fly match the insect's movement or stillness, its size, the overall impression it makes when it's afloat, and—always a critical factor on streams if the insect is quiescent—its free, natural drift on the current (this last, not a factor of course on the standing water of lakes). Selling a dry fly to trout is not about the fly having real-bug details.

Nymphs are different; they're down there in full view of the trout. No distortions of water to cover their flaws. That's exactly why, under certain conditions, a semi-realistic nymph pattern might sometimes catch the most trout. A nymph like my Anatomical Green Drake.

Putting wing cases in fly patterns that suggest wing-cased mayfly nymphs and stonefly nymphs is almost standard operating procedure. So my Anatomical Green Drake has one (though its wing case, like a real mayfly wing case, is shiny). But the fly has lots of other trout-convincing parts: three divided tails, a hard-looking and glossy back over its abdomen, gills fringing its abdomen, quiet natural-copper-wire ribs up its abdomen (they show smartly against the smooth back), and speckled fibers from a partridge feather fanned at its sides like real mayfly nymph legs. The thing is mostly somber shades of brown and olive or green, like the nymph of the real Green Drake mayfly.

The tails, I came up with a slick twist for those: I snipped down the fibers to almost the stem-tip of a partridge feather for the center tail, left some fibers on the sides for the other two. It worked: they look right, are supple (the leverage caused by stiff tails can sometimes interfere with hooking trout), and naturally stay neatly spread.

A bead, dark and on the small side to suggest the natural's head, helps the fly sink. As does a core layer of lead-substitute wire.

I've always fished the fly dead drift, deep, typically in streams where Green Drakes are hatching. Not during the actual hatch, though—when trout rise to the new and shuck-emerging duns, I fish to their rises with true dry flies or half-floating emerger-flies. But perhaps that's a mistake. Perhaps I'd be wise to drift an Anatomical Green Drake through those rising trout. Or to swing it as you'd swing a Leadwing Coachman wet fly.

I'm going to look into that.

TAIL: A dyed-olive or -brown partridge flank-feather tip, the fibers trimmed down close to the stem and a group of fibers left on each side.

BACK: Olive or olive-brown translucent sheeting, such as Scud Back or Stretch Flex.

ABDOMEN AND GILLS: Dyed-green (or -olive) and dyed-brown ostrich herl twisted around the working thread (two olive, one brown). Trim the underside of the abdomen flat if you wish.

WING CASE: Same sheeting as the back.