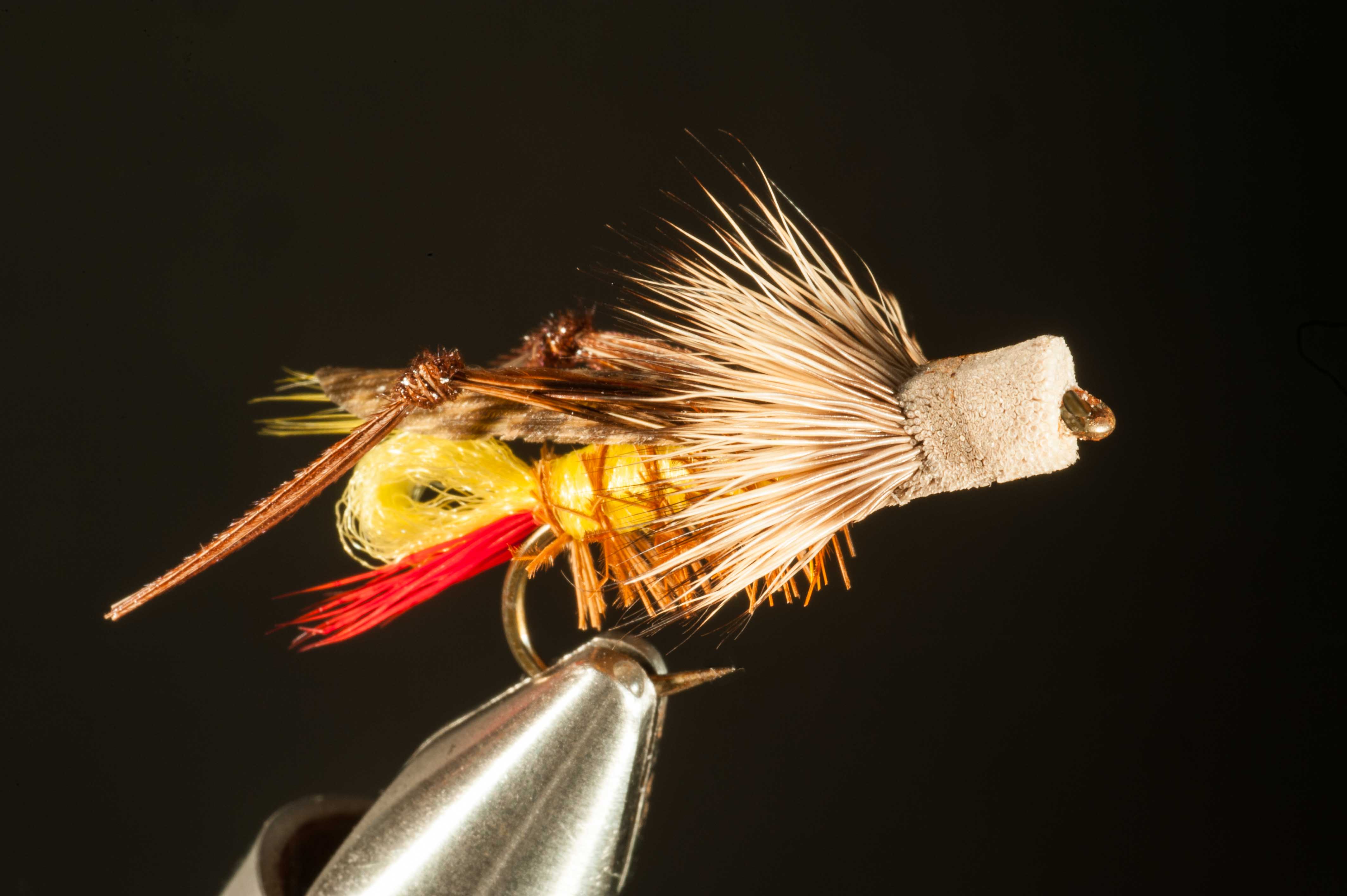 Some very effective imitative trout flies (as opposed to attractor flies that aren't supposed to imitate anything) bear faint resemblance to a caddis or mayfly or such.

Other flies do look like their models. Take the Dave's Hopper—if you can't see a real grasshopper in it, don your glasses, or if they're already on, make an appointment with your optometrist.

For some decades, most fly shops and fly-fishing catalogs have wisely carried the Dave's Hopper: fly fishers have learned it catches hopper-seeking trout, fly fishers want it in their boxes, and it's really everything a grasshopper fly should be. (To be fair, though, there are other fine hopper flies around these days: Rainey's Grand Hopper, the Club Sandwich, Shroeder's Parachute Hopper, others . . .)

Those who set out tie the Dave's Hopper for themselves have a good workout before them. Tying one is a fairly complex process, involving some gluing, some knotting of pheasant-tail or other feather fibers (or hackle stems), some flaring and packing and sculpting of deer hair. I laid out all the details—the dressing, a little of the fly's history, the tying steps (fifty-seven photos with captions of them!)—in my book Fly Tying Made Clear and Simple II: Advanced Techniques. (Which, I report with great sadness, is at this time out of print. But there's hope—after all, the original Fly Tying Made Clear and Simple is back!) So I know exactly what it takes to tie a Dave's Hopper. But if the fly is a fun challenge and something of a time-eater at the vise, it pays for the investment of effort and time by its durability: a well-tied Dave's Hopper will survive a lot of teeth-gnashing trout.

And the fly is a good floater owing to its buoyant hair head and collar, and to its nearly-as-buoyant looped butt and body of Poly Yarn. Sometimes you need to twitch a grasshopper fly in order to move trout that are seeing leg-kicking real hoppers. The Dave's Hopper can take such twitching and remain afloat.

Yet I do not start by tugging at a Dave's Hopper; doing so takes out all slack from rod-tip to fly, no slack tries to turn the fly's drift, between twitches, into drag. Drag makes the fly glide across the current like a motorboat set low on the throttle, and grasshoppers on water don't glide. So I try the fly dead drift until it moves trout or fails to do so. If it fails, the tugging begins. And though dead drift is tricky to achieve without slack, it can be managed.

A harsh drop can be a wise way to present a Dave's Hopper to trout. Ever seen a real grasshopper hit a stream? The way this beefy terrestrial bug seems to avoid plunking down on water means that it ends up there only by accident. Accidental landings of anything—not just flying insects but boats, planes, kites, etc.—are usually ugly. So the hopper nearly always hits the dense water pretty hard, a punching of the surface into a brief cavity, even a few droplets slung; this little violence seems something hard for a trout to miss. If you make your fly land that way—splat—that's a convincing show to a trout that swiped down a crash-landed grasshopper five minutes before. Just don't overdo: a grasshopper is pretty small and lightweight and nothing like a cannonball or anvil—you're trying to attract the trout, not make him a trauma victim.

Dead drift, twitched, planted smartly or dropped gently, however you put the Dave's Hopper before a trout, the trout will see a very convincing representation of a grasshopper. And likely, if he's got hoppers on his mind, will take it.

THREAD: White or gray size-A rod thread for flaring and binding the deer hair; yellow 3/0 or 6/0 for the rest.

BODY: Poly yarn (the same stretch of yarn that makes the butt. No need to cut the yarn after forming the butt; just start winding it forward to make the body).