In part one of the Turck Tarantula, master fly tier Skip Morris takes you through the origins and development of this popular attractor fly.


In part two, he shows you how to tie it, with clear step-by-step instructions.


The Turck Tarantula: Unusual...or Not? 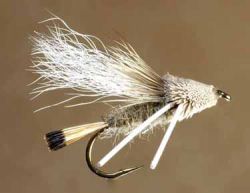 
If this fly(often referred to as Turks Tarantula) strikes you as bizarre...well, you need to get out more.

When you do get out, take a look at the Chernobyl Ant, the Royal Coachman Trude, even my own Predator—this fly looks pretty normal alongside other attractor dry flies.

The Irresistable Pull of the Attractor Fly

Bizarre or not, it works.

I first tried it on a small river with a healthy population of cutthroat trout. The fish were wild, strong, of good size—some truly large—and moody. Their mood called for big attractor dry flies, it seemed, and they came freely to the Turck Tarantula.

My wife Carol and I used the fly often during our week on that and other cutthroat streams in the area, usually with success.

In my experience—and according to everything I've read about it—the Turck Tarantula is an attractor, pure and simple.

I suppose an open-minded trout might take it for a big stonefly or even a grasshopper now and then, but the resemblance strikes me as pretty thin.

Personally, I treat it as a fly for trout

that are showing little interest in the things they normally eat,

fish that have had enough mayfly nymphs lately

but stir at the sight of some big silly wad of hair and rubber on a hook.

I found this amazing fly in Jack Dennis's Tying Flies with Jack Dennis and Friends, but had heard of it before that, and what I heard was that it was a hot new attractor pattern.


According to Jack's book, Jackson Hole fishing guide Guy Turck developed the fly based on what he liked about the Madam X and what he felt it lacked.


He liked its gangly rubber-strand legs, but felt the fly lacked sufficient buoyancy. So he kept the legs; dubbed on a thick, fuzzy body, and added a head of flared buoyant deer hair.


Apparently his creation was a hit—and a winner—at the Jackson Hole One Fly contest.


How to Fish the Tarantula
for Striking Results

Jack's Tying Flies quotes Turck himself regarding how to best fish his big attractor fly:

In big fast water I just drift the fly and let the movement of the water wiggle the legs.

At the end of the drift, if nothing happens, I swing the fly in the current, pull it under and pump and retrieve it back wet.

I myself normally fish this big fly entirely on top, dead drift usually, but occasionally with twitches.

Turck's approach, however, certainly covers more ground than mine—he makes it a free-drifting dry fly, briefly a skating one, and finally a sort of bucktail or minnow-imitation, all from one cast.

The Art of Tying the Turck Tarantula

A few tips on tying the Turck's Tarantula:


The Right Hook?
It Depends a Bit on Personal Preference

Tying Flies calls for a heavy wire hook for this large fly, insurance, perhaps, against losing the big fish it can attract. But since it is a dry fly, I use a standard-wire or light-wire hook. I don't believe such a hook has lost me any fish yet, and this particular fly has taken me a few dandies.

I also generally use a 2X-long hook rather than the 3X long listed in Jack's book.